THE (SOFT) POWRR OF THE ARTS IN A CHANGING MIDDLE EAST

The Middle East institute hosted a discussion about the growing impact and influence of the region's increasingly dynamic arts scene with Saudi artist Sarah Abu Abdallah, Stephen Stapleton, artist and cofounder of Edge of Arabia, a collective of contemporary artists from Saudi Arabia and the wider Middle East, and Oussama Rifahi, executive director of the Beirut-based Arab Fund for Arts and Culture (AFAC), which provides grants to Arab artists.

The panelists discussed the transformational social and political role that artists are playing in their societies, as well as the challenges and opportunities that both artists and art platforms face as they seek to increase and enhance contemporary art and culture production in the Arab world. The event was moderated by Kate Seelye (The Middle East Institute).

Watch The Soft Power of the Arts in a Changing Middle East below:

Kate Seelye: is senior vice president of The Middle East Institute, where she oversees MEI's programs and communications. Prior to joining MEI, Seelye worked as a radio and television journalist covering the Arab world from 2000-2009 from her base in Beirut, Lebanon. She reported on the region for NPR, BBC's The World, PBS' Frontline/World and the renowned Channel Four British investigative news series, Unreported World. Prior to that she worked as a producer for the Newshour with Jim Lehrer on PBS.

Sarah Abu Abdallah: was born in Saudi Arabia in 1990. She discovered art through her mother and continuously studied art from a young age. She then pursued her art education at the Sharjah College of Fine Arts in the United Arab Emirates. Her works embed a sense of tradition and culture, although executed in contemporary means. Her recent works deal with the act of covering; through photography and video she investigates different meanings the cover produces as it sheathes a subject. In reference to gender roles and women covering, Abdallah covers various subjects to impose on them the experience of a female, exploring in the process issues of obscurity and value.

Oussama Rifahi is the Executive Director of the Arab Fund for Arts & Culture (AFAC). Oussama joined the Arab Fund for Arts and Culture in July 2010. Previously, he was managing director for museum development in New York for Global Cultural Asset Management, and provided cultural consultancy services to governments, cities, foundations, and private collectors in Europe, the Middle East and Central Asia. As director of special projects for the Guggenheim Foundation, Rifahi led feasibility studies of modern and contemporary museums in Europe and supported the initial negotiations between Abu Dhabi and the Louvre and Guggenheim museums. 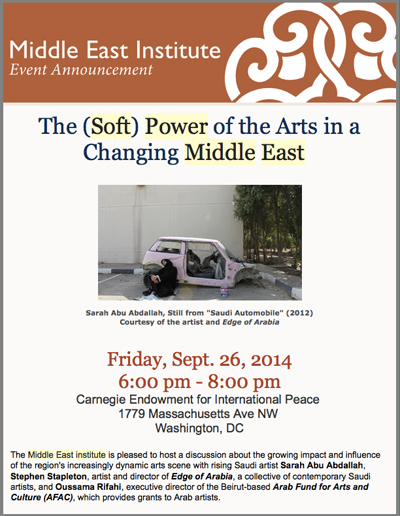