Foundland arrive in New York to begin their Residency. Jul 2014

Taysir Batniji solo presentation about his practice at ISCP, Aug 2014

Edge of Arabia, in partnership with Art Jameel and the International Studio & Curatorial Program (ISCP), and with additional support from the Zedan Group, awarded its first artist residency in the United States to Palestinian artist Taysir Batniji, and Foundland, an artist collective from Syria and South Africa. A central component of this multi-year US tour, the concurrent 3-month long residencies allowed Batniji and Foundland (comprised of Lauren Alexander and Ghalai Elsrakbi) to participate in the ISCP’s acclaimed studio program in Brooklyn from July through September 2014. The programme supported the artists’ practices and immersed them in the cultural landscape of New York.

The artists presented 3 exhibitions across 2 cities (New York & Baltimore) as part of their residencies reaching a wider audience of over 1,500 people:

1. “Escape Routes and Waiting Rooms” by Foundland, July 30th – September 26th, 2014, at the ISCP, Brooklyn, New York. Download Press Release here. In Escape Routes and Waiting Rooms, Foundland investigates personal stories of mobility and migration around Syria, a place where freedom of movement is strictly restricted due to its ongoing civil war. In two newly created installations, a Syrian family’s dinner table is re-staged to depict a schematic map of a family where most of the members have migrated from the country over time. The work reveals intimate family moments and history set in a ravaged country where millions of people are displaced. Also included in this exhibition is a tent and video installation modeled on actual tents used in Za’tari camp in Jordan, one of the largest Syrian refugee camps in the world. Originally serving as a temporary living space, a refugee tent can be considered a “waiting room” for an unknown future. Foundland visualizes the potentiality of the tent as a symbolic transformative structure, which initially facilitates temporary, emergency landscapes, but could become the starting point for new communities over time. This exhibition was organized by Kari Conte, Director of Programs and Exhibitions with Shinnie Kim, Programs Manager. A catalog was published to accompany the exhibition with a commissioned text by Nat Muller, an independent curator and critic specializing in media art and contemporary art in and from the Middle East.

2. “Full Bleed” at Lease Agreement by Taysir Batniji, September 27th - October 25th, curated by Liz Park at Full Bleed, Baltimore, Maryland. Batniji’s solo presentation at Lease Agreement include video, photography, and installation made in response to and as a part of the artist’s experience of living in what he describes as the “space that is neither here nor there. This other space that is not home but not elsewhere either…a sort of in-between, a space with no borders where I feel at home, albeit a temporary home. From Vancouver, Canada, Liz Park is a curator and writer currently based in Philadelphia as the recipient of Whitney-Lauder Curatorial Fellowship at the Institute of Contemporary Art, the University of Pennsylvania. Lease Agreement is a collaborative curatorial project by artists Adam Farcus and Allison Yasukawa. Set in the living room of the couple’s rental house, Lease Agreement continues in the tradition of apartment gallery exhibition spaces by exhibiting conceptually rigorous, engaging work within the context of a home.
3. "Quiet days at the UN", by Taysir Batniji, was presented as part of ISCP's New York Stories: Twenty Years of ISCP exhibition, 7 November 2014 - 30 January 2015. The work comprised of a 24-minute video consisting of a single stationary shot of New York’s United Nations building. Taken across the street from the UN on 25 July 25 2014 during the 2014 Israel-Gaza conflict — while Batniji was in residence at ISCP — the video comments on the inability and powerlessness of the UN to act in the face of thousands of civilian deaths in Gaza.
The artists were part of 4 public speaking events across 3 cities (New York, Washington D.C. & Houston) reaching an estimated 1000 targeted people, including state department officials and policy makers, US museum curators, international artists, journalists and members of the general public:
1. Taysir Batniji in conversation with Jerusalem Fund curator Dagmar Painter, at the Middle East Institute in Washington D.C.

2. Taysir Batniji solo presentation about his practice at ISCP in Williamsburg, New York. Taysir recounted his journey from Palestine to Europe, and particularly France, where he arrived in 1995, as well as a selection of works he has realized in recent years. In between France and Palestine - both geographically and culturally - he developed a multidisciplinary art practice in which the image, photo and video occupies an important place. He devotes part of his work to analyzing the process of media information, especially news in the Middle East.

3. Taysir Batniji in conversation with Dina Al-Sowayal and alongside Fred Baldwin, Wendy Watriss, Sarah Abu Abdullah, Stephen Stapleton and Professor Ussama Makdisi as part of CULTURUNNERS launch at the Rothko Chapel in Houston.

4. Foundland in conversation with critic, curator and founder of Arte East, Livia Alexander under the theme: “Visualizing Displacement And Other Stories”, at ISCP in New York. In the context of their solo exhibition at ISCP, Escape Routes and Waiting Rooms, Foundland discussed some of the central themes covered in their exhibition related to subjective strategies of mapping, as well as the relation between their work and the media’s reportage of the Syrian situation. They touched on previous works that examine how the conflict is represented on social media through the creative expression of activists and propaganda-makers.

All three artists began new bodies of work during the residency and expressed their intentions to return to the US to develop their projects.

Taysir Batniji (b. 1966, Gaza, Palestine) is an interdisciplinary visual artist who divides his time between France and Palestine. His practice incorporates drawing, painting, installation and performance, often closely related to his heritage – however since 2001 the artist has focused primarily on photography and video. Batniji has participated in numerous international exhibitions, including Untitled, 12th Istanbul Biennial (2011); Future of a Promise, a collateral event of the 54th Venice Biennale (2011); Seeing is Believing, KW Institute for Contemporary Art, Berlin (2011); and RAY 2012 Fotografieprojekte Frankfurt/Rhein-Main (2012). Taysir Batniji is represented by Galerie Sfeir-Semler, Hamburg & Beirut, and by Galerie Eric Dupont, Paris. 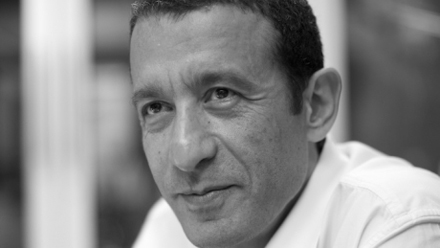 Foundland (established 2009) is a collective whose work draws on graphic design, art, writing and research. Comprised of the artists Ghalia Elsrakbi and Lauren Alexander, Foundland focuses on a critical analysis of topics related to political and locational branding through visual and written forms. Since 2011 it has centered more on the Middle East, with special interest in Elsrakbi’s homeland, Syria. Foundland has developed an expanding database of visuals and information, gathered from observations of media, activist groups and trends of political expression across social media. Drawing unexpected relations and connections, they create alternative narratives to media reporting through innovative image making and personal interpretation. Foundland has presented in group exhibitions including the Kadist Foundation, Paris (2012); Impakt Festival, Utrecht (2011, 2012); BAK, Utrecht (2012); and the Damascus Visual Arts Festival, Istanbul (2013) – and has presented lecture at Studium Generale ArtEZ, Arnhem; de Appel for Sandberg Institute, Amsterdam; Royal Academy of Arts, The Hague; Rietveld Academie, Amsterdam; and the Athens Biennial 2013. In 2013 they completed an artist residency at the Townhouse Gallery in Cairo.

Ghalia Elsrakbi (b. 1978, Damascus, Syria) completed a BA Graphic Design at Artez Hogeschool voor de Kunst, Arnhem, followed by a Masters in Design at the Sandberg Institute, Amsterdam. In 2009, she followed a research post-graduate at Jan van Eyck Academy in Maastricht. Since 2011 she has been involved with various activist groups promoting creative dissidence in Syria and since 2013 she has been based in Cairo, Egypt.

Lauren Alexander (b. 1983, Cape Town, South Africa) completed a BA Graphic Design at the University  of Stellenbosch in South Africa, followed by a Masters in Design at the Sandberg Institute and an MFA at the Dutch Art Institute, Arnhem. She is member of the tutoring staff at the Royal Academy of Arts in the Hague. 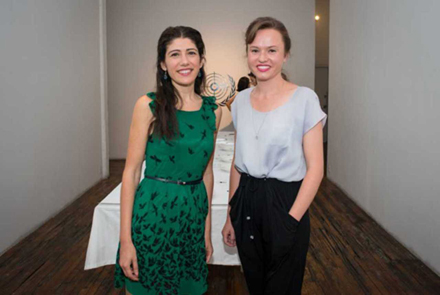 ABOUT THE APPLICATION PROCESS