AYMAN YOSSRI DAYDBAM INTERVIEWING OTHER ARTISTS IN HIS ISCP STUDIO

AYMAN YOSSRI DAYDBAM ON 125th STREET IN HARLEM DURING HIS RESIDENCY

The Art Jameel Artist Residency is a continually developing project, created in partnership with Edge of Arabia, which aims to support artists from the Middle East and North Africa by providing them with a platform in New York City to further develop their practice, share their work with new audiences, and collaborate with locally based artists. 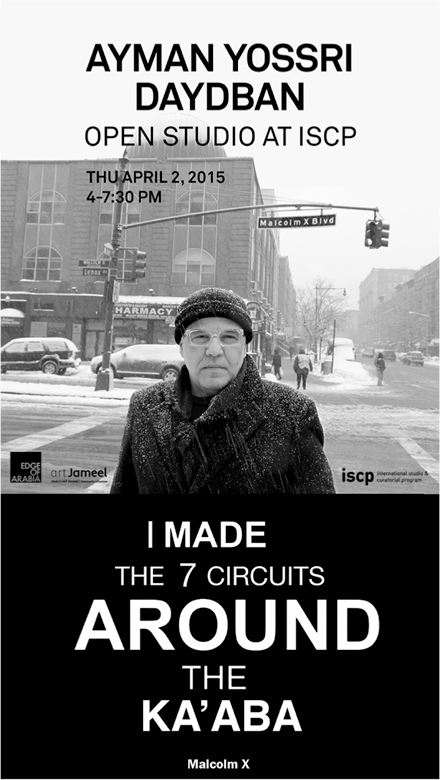 March – April: Ayman Yossri Daydban (b. 1966 in Palestine, lives and works in Jeddah, Saudi Arabia), is a conceptual artist whose work centers on the intricate patterns and relationships found in his own biography and exchanges with the broader social and political environment. During his residency Daydban focused on the latest iteration of his Subtitle series, and in collaboration with Hazim Tawfiq, a Harlem based artist and street vendor. The inspiration for this project is Malcom X’s speech after his return from Makkah in 1964.  SALAR one of the EFA residenct composed an original sound piece for this project. Daydban’s residency has enabled him to undertake on-site investigations of historic sites in New York City that he has previously only been able to research from afar, including at The Malcolm X and Dr. Betty Shabazz Memorial & Educational Center in Harlem. Daydban’s project is the subject of a short film directed by Husam Al Sayed for FREEWAY, the broadcast program of Edge of Arabia’s US Tour in partnership with Art Jameel. 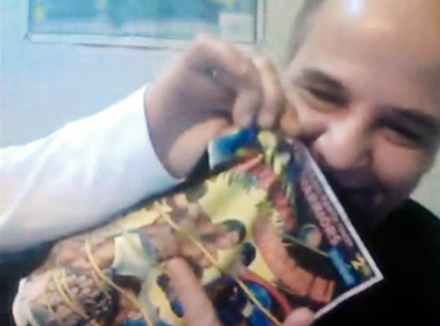 April – July: Zeinab Shahidi Marnani (b. 1983 in Iran, lives and works in Tehran) is a conceptual artist. She holds a MFA in sculpture from Yale school of art. She was awarded the Alice Kimball English Traveling Fellowship to travel to Tehran and New York in order to make a documentary video. Her work has been shown in local and international art spaces including Parking Gallery and Tehran Museum of Contemporary Art, Tehran, Thomas Erben Gallery, New York, Devi Art Foundation, India, designtransfer gallery (UDK) and TYPOBERLIN (HKW) House of culture, Berlin. In 2011 she collaborated on “Seeing Studies”, Artist’s book produced by dOCUMENTA (13) in conjunction with Casco.

July – Sept:  Sara Ouhaddou (b. 1986 in Morocco, lives and works between Paris and Morocco) is an artist and designer whose practice has developed over years of collaborations with artisans from her local community in Morocco. Ouhaddou is interested in preserving and reinterpreting traditional craft techniques and using them as the base of her contemporary practice. Holder of a diploma from the école Olivier de Serres in Paris, Ouhaddou questions the availability of the design as a tool for the economic, social and cultural development. Born in France in a Moroccan family, her double culture improves her practice within a continuous movement. Ouhaddou is currently an artist-in-resident with The Arab Fund for Arts and Culture (AFAC). 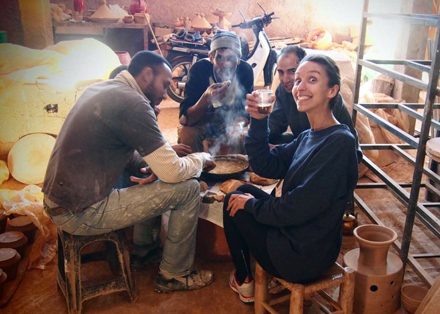